I'm already off script on my schedule. Circumstances led me to start in on my Iron Hands earlier than expected. I managed to finish 3 models: 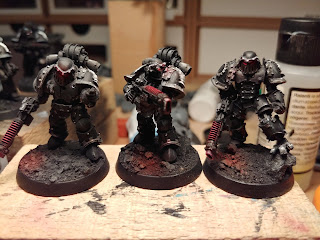 The last guy on the right has a magnetized backpack to allow for a vexila. No metallic paints, just nmm greys, some nuln oil out an airbrush and white highlight. Took far longer than it should have, hours more, but I had to really feel out the scheme a bit on this one. Iron hands colors (black, mostly) is just so boring, I had a hard time thinking of what to do. You can't really see it, but I included some light reflective striations with sotek green/white that I blended down. The nuln oil removed a lot of that work, but some is still visible; I kind of like how that turned out so that it is a muted effect. Most people wouldn't notice it, but I enjoy that it's there. I'll add decals later when I have them.

Next weekend, I think I'll finish the squad of ten. If I have more time (I doubt it) I may put together another 10 man squad with volkite just so I don't have to return later. 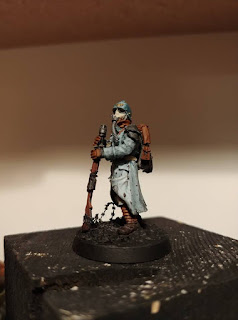